So, I finally got rid of Blogger. Google just knew too much about me and Big Brother was definitely watching, so I deleted my Google account – I know, I’m such a radical. Though I didn’t realise just how much else I’d lose – calendar, all my saved YouTube files, probably loads of other things I haven’t noticed yet. Anyway, it’s done.

We’re just back from two weeks in Egypt where the culture is, to say the least, different. Haggling is a way of life, that’s fine, but hustling was unexpected and very unwelcome, especially when people shove things into your hands even though you say you don’t want them, then demand money because you’ve touched them. Where ladies try and block your exit from public bathrooms until you’ve paid them – for the privilege of them giving you a single sheet of toilet paper – even though they’re not supposed to receive tips.

Despite that, it’s a fascinating country and obviously rich in a history that stretches back millennia. It’s strange to think that in a country that is, in so many ways, backwards, poor and feudal, that they can know so much more about their ancestors than we do about ours. Though I guess they’ve got a few landmarks that give them an inkling – ours all just rotted away in thousands of years of British weather.

But the sheer amount of knowledge and artifacts they have is astounding. Jaw-dropping. Five thousand years old, four thousand, three thousand, Christian graffiti inside a New Kingdom tomb, slathered across works of astonishing art in a crude and juvenile hand to debase another’s religion, even though it had pretty much died out by then.

Sons desecrating the tombs of their fathers, their mothers, stealing their funeral treasure to add to their own hordes.

What I really loved was that the royal line passed through the female, not the male. Because the male would have potentially dozens of concubines and sons, the claims to the throne would be numerous, so the royal line passed through the women, who would (theoretically) bear the pharaoh’s child only. Of course, this meant that in order for the next pharaoh to claim his throne, he had to marry a female member of his family – sister, niece, aunt or even mother. Yet there doesn’t seem to be a record of children born suffering from inbreeding. Maybe they just hushed that up.

The other thing I learned was that the pyramids were not built by slaves. They were built by farmers in the three months of every year when the Nile flooded their land and they were unable to farm while the waters laid down the precious silt that nourished the soil and provided a rich source of plant life the following year. They built them for three months a year only (obviously the stone was quarried and cut and transported year round, but the actual construction only took place during the flood) and it took only twenty years for the Great Pyramid to be constructed. That’s pretty good going.

We went inside one of the satellite pyramids and experienced how it must have felt for the workers to dig those foundations into the stone – it was as though there was only 70% oxygen at the bottom and not humid as such, but breathless, airless. We came out drenched in sweat and we’d only stood looking around for ten minutes, let alone dug the burial chamber for hours on end.

We saw the Sphinx which was an incredible sight, though I learned to my chagrin that she, as I’ve always believed her to be, is in fact male – a representation of Khefren, who built the second pyramid. It was a really magical day.

We saw the Museum of Egyptian Antiquities and the death mask of Tutankhamem – 11kg of solid gold. Spectacular.

We also visited Luxor, the reconstructed temple of Hatshepsut, the Valley of the Kings and finally Karnak Temple, at 62 acres in size – no, we didn’t walk all the way around! Luxor was New Kingdom era but no less special. Tutankhamen’s tomb, the tomb of Rameses II (the great), the tomb of his 92 sons. Yes, 92. Rameses’ twin ambitions in life were chiselling out of the stone any representation of his father, Seti I, and making sons. He was prodigiously good at both. 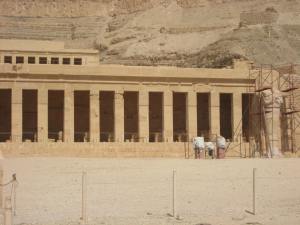 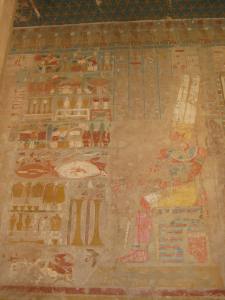 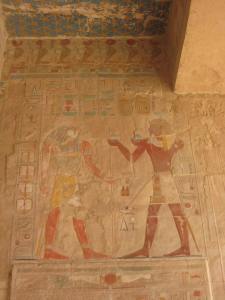 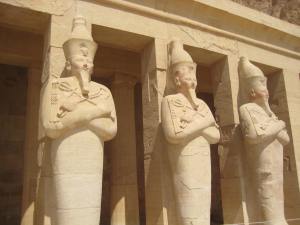 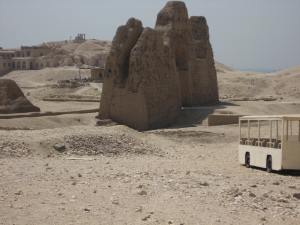 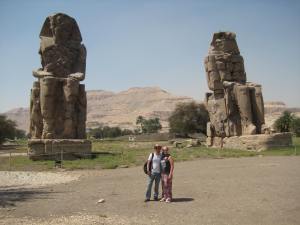 That was also a colossal day, despite the sandstorm in our home resort that caused a 12 hour delay in us getting back.

All in all, a fantastic holiday, and one I would recommend despite the unrest – just keep an eye on the foreign office and do what your guides tell you to do.