Well, no, not the end, obviously, but only the beginning. Waxing lyrical this morning. More tea required.

They’re a group of like-minded geeks who read and watch more spec fic than can be healthy, and they all go to the pub after a session to engage in further geekish pursuits. I fit in like a kebab into a mouth at 3am on a Saturday.

The last session was the AGM, and I put myself forward for a couple of roles – anthology editor and social media manager. I got both. I may have over-stretched myself. Fun, though. I have high hopes for the anthology – they were granted some lottery money a while ago to fund the anthology, but so far there hasn’t been enough submissions on a similar theme to craft one, so I’m going to come up with theme ideas that are broad enough to to encompass everyone’s skills, and I’m going to ask each member to submit three pieces on that theme so I’ve got lots to choose from.

And I’d love to do it properly, as an editor, suggesting revisions in collaboration with the author, discussing the pieces so that they’re as good as they can possibly be. I don’t know if I’ll ruffle feathers with this approach – I’m no literary agent after all – but I think it would bring the best out of the pieces under consideration. Time will tell.

They also, astonishingly, voted my short story, The Model 39, as Manuscript of the Year. I wasn’t entirely comfortable with that, as I haven’t been there very long and there were a lot of very strong pieces submitted, but it was their decision, not mine. I voted for the other guy. Pleased, though, just a little awkward. I get a big crystal vase to keep for the year in recognition of my triumph.

So if any West Midlands-based writers are looking for a home, please do consider joining Birmingham Writers’ Group. 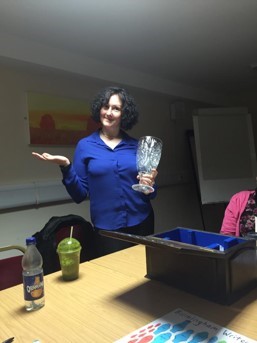 My sci-fi rewrite is going slowly, but, I think, well. Yes, I know I’d originally decided to do it in order to send it to the Angry Robot open submissions, but I missed that deadline by a mile when I realised the edit was a full-scale rewrite.

However, I’m having fun with it and last week I had a major plot breakthrough that has made a lot of things fall into place and opened up several avenues for suspicion, betrayal and the spilling of blood into perfect crimson spheres in the blackness of space. Excellent.