I’m editing Godblind, in accordance with my agent Harry Illingworth’s suggestions. And boy, is it difficult.

I don’t disagree with any of his recommendations; they all make sense, and I know they’re going to improve the manuscript tenfold. It’s just hard.

When he sent them through – one page of suggestions – I thought I’d bang them out in a week and send it back and he’d been amazed. Well, if I’m hoping to amaze him, I need to learn a bit of patience and put a good deal of thought into what I’m doing. I can’t just ‘slip in a scene’ here and there, which is what I’d naively assumed I’d be doing, because every scene I add or change has a knock-on effect throughout the narrative.

Yes, I know, that sounds obvious, but it’s when you come to actually do it that you realise just how wide-ranging those knock-on effects can be. In at least one instance I need to invent an entirely new character, with backstory, just to work in two or possibly three scenes. But then no doubt he’ll crop up again in the sequels, so he can’t be a ‘filler’ character. He’s got to be real.

But I’m loving the process. I’m thoroughly enjoying having the perspective and expertise of a professional critiquing my work. Someone who’s as enthusiastic about it as I am, which really helps. And someone who’s pushing me to examine the quality of my work and make it better, to do thing to characters and plot that I’m uncomfortable with.

The best thing? By asking me to kill off a major character, I can already see alternative outcomes for the rest of the trilogy. Harry has made me confront the fact that I like my characters too much to kill them. Now I’ve got three that are potentially going to meet their doom because it would make for a better trilogy. Not for them, obviously. But for the reader. Who I hope will curse me and rail against the injustice that their favourite has just met a sticky end.

So thanks, Harry. At least when my readers ask me how I could possibly have done what I’ve done, I can blame it on you…

Oh, and I’ve just been sucker-punched by the ending of Golden Son, by Pierce Brown. You guys. YOU GUYS. Read this trilogy. It starts with Red Rising and finishes with Morning Star, which I’m about to dive into headlong – once I’ve done another edit or two, that is. Pace, action, relentless forward motion, twists like a rollercoaster… Oh man, this is writing. 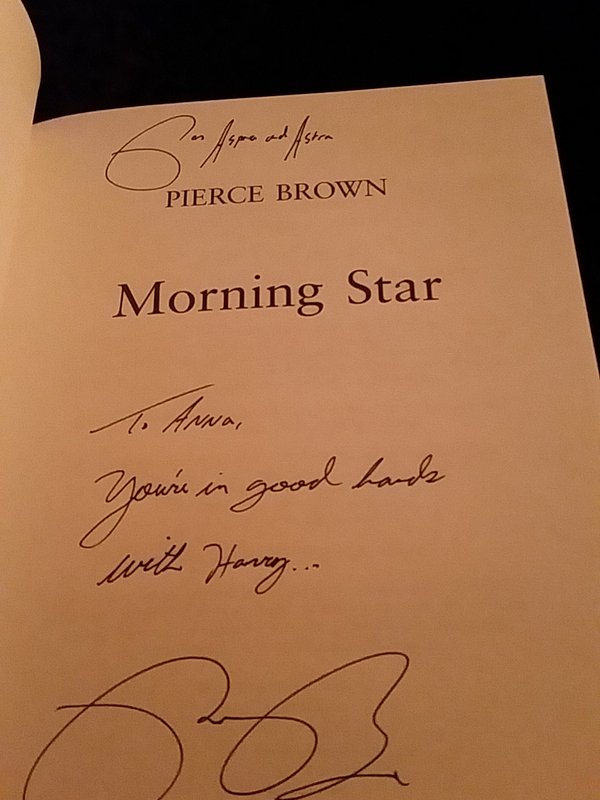 One thought on “Following someone else’s recommendations is hard”