Over the weekend I was at Fantasycon 2016, in the sleepy English seaside town of Scarborough. We stayed in a little pub-hotel called The Dickens, which was lovely and very tilted without a straight floor or wall in it.The windows rattled and seagulls screamed at 5am and it made me very nostalgic for summers in Exmouth with my grandparents.

We travelled up on the Friday afternoon, so we missed some of the action, but we had a full day of fun on the Saturday, including attending panels, drinking in the lounge areas, promenading along the seafront, eating fish and chips, more panels, more drinking, a Thai dinner, the Gemmell awards ceremony and then a very bad karaoke which we finally had to abandon for sanity purposes. Some fantasy fans, writers, editors and agents are excellent singers. Others … are not.

We also found the Tardis…

I attended panels on the success of the superhero medium in film and TV and the extent to which that impacts on SFF – do audiences expect their protagonists to be superheroes, flawed or otherwise? This led nicely on to a panel later in the day on whether you should kill off main characters. In the superhero world, they die and then they come back. All the major DC and Marvel heroes have died multiple times.

In SFF writing, this is much less common or workable. Author Steve McHugh pointed out the law of diminishing returns. The first time your character dies – huge emotional impact. The first time they’re resurrected – joy, relief, excitement. But if you keep on doing that, your audience stops caring.

Doesn’t matter if Batman dies in the latest comic book edition – we all know he’ll be back in a few issues. There’s no emotional investment to that death, therefore it serves no greater purpose.

So if you are going to kill a character – do it well, describe it beautifully, and leave your readers devastated.

I also attended a panel with Edward Cox of the Relic Guild trilogy on discussing whether authors plan in great detail their novels. The consensus was they know the beginning and the end and maybe a few major elements in the middle, but they generally let that middle bit work itself out.

That was nice to hear, as that’s pretty much how I’ve been writing. I had considered skipping that panel – in my hubris thinking why should I attend, I’ve already got a book deal. I’m really glad I did, because I found it really useful to listen to other authors discuss various tips, tricks and tools they use to jot down notes, link disparate scenes and find the discipline to do the work when it needs to be done.

I was also extremely lucky to get a spot in the Elizabeth Bear and Scott Lynch masterclass on “the trials and tribulations of being a writer”. That was a cosy hour of 15 people around a table listening to two excellent authors discuss the craft of writing. They covered bad advice they’ve been given, good advice they’ve been given, what they wish they’d learned ten years ago – according to Scott, that’s “stretch. Don’t sit down all day every day, you’ll break yourself”. A lot of people listening wrote that one down!

They also covered whether you need a strong online presence, whether you should have opinions on award winners or the wider world, how much effort to put in to self-promotion.

My biggest takeaway, though, concerned the trappings of the book that you’re lucky enough to have published. Don’t sweat the cover artwork, the font, the blurb or the quotes from reviewers. Those are not your concern. If the art department depicts your main character on the front cover and you know that’s not what he looks like in your head, it doesn’t matter. If there’s a dragon that plays a minor part in your novel and there’s a dragon on the front cover, there’s a reason for that.

This was the gem of the whole weekend for me, because I know Harper Voyager’s art department is working on the cover for Godblind. And I have no idea what they’re going to come up with. And I always had ideas about what the cover should look like. I wanted this, I definitely didn’t want this. But you know what? My job is the words. The publisher’s job is the marketing and promotion, and they know what works. So I’m not going to stress the cover art anymore. I’ve no doubt it’ll be fabulous either way.

Unfortunately we missed the actual Gemmell awards presentation. The convention agenda said it was on from 7pm until 9pm, so we expected the presentations to be towards the end of that. We got there about 7.45pm, straight from dinner, and they were done and dusted! However, it was AMAZING to find out that all the winners were with Harper Voyager – Pete Newman, best debut novel (The Vagrant), Mark Lawrence, best novel (The Liar’s Key), and Jason Chan for best cover art (also The Liar’s Key). So huge congratulations to them all.

On the Sunday we joined the English Heritage Trust and visited Scarborough Castle. 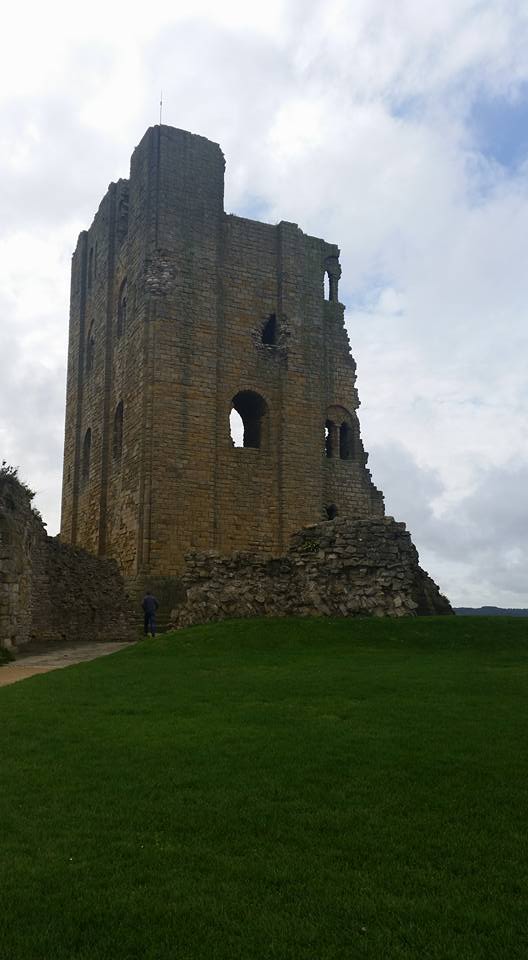 All in all, it was fabulous, and I can’t wait for the next one.