Alright you wonderful, beautiful folk who nominated Godblind in the public consultation for the 2018 Gemmell Awards – you were successful! I’m on the longlist. You know what that means…. yep, start voting all over again 🙂

Voting closes on Friday 30 March, and Godblind is eligible for both the Morningstar Award – best debut novel – and the Ravenheart Award – best artwork. I think we can all agree that THIS deserves an award? Oh yes. She is so beautiful. 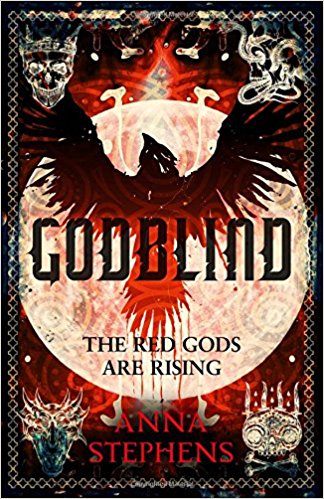 Of course, I would love it if the words inside also won an award, so if you loved Godblind, or even just really liked it a lot, you can vote for her here.

Godblind’s up against 19 other debut novels in the Morningstar category, including some damn fine novels, so I expect the competition will be fierce. Anything you can do to help is appreciated.

While I’m on the subject of awards, Godblind is eligible for nomination in both the Nebulas and the Hugos. If you’re a paid up member of either organisation and think she should be nominated, please do so! I really don’t mind!

In other news, I’ll be appearing at a panel event with the exceptionally talented Bradley Beaulieu (on UK tour for his latest novel, A Veil of Spears) and Stephen Aryan (Mageborn, book 1 of the Age of Dread series). The event takes place on Thursday 5 April at 6.30pm, and tickets cost the princely sum of £3.00.

We’ll be discussing our books and the worlds we created, plus how we went about doing that. Should be fun!

We’re motoring along with edits for Darksoul, and I’ve just rejigged the ending to make it even more distressing for the reader. Yes, that’s how much I love you…

I’m getting really excited about it now as it’s really fallen into shape the last couple of months. I’m waiting for some final thoughts from my editor before I give that last spit and polish.

Lastly, I’m really excited to announce that the Art of War charity anthology is now live and available for purchase from Amazon as ebook or paperback. 40 fantasy authors responded to the editor’s call for content to create a MASSIVE anthology of fantasy war stories, with all profits being donated to Medicins sans Frontieres/Doctors without Borders, a fantastic charity that is deserving of as much money as can raise for it.

The paperback version also has 40 black and white pieces of artwork, one relating to each story. There’s a lot of established authors contributing, including Mark Lawrence, Brian Staveley and Miles Cameron, plus plenty of us upstarts and debuts. With 40 stories on offer, there’s absolutely something for everyone.