I recently had the pleasure, nay the privilege, to interview Cameron Johnston, whose debut novel The Traitor God is published on 5 June through those fine silicon-based lifeforms at Angry Robot. Cameron has the distinction of being my second ever interviewee on my website – what a thrill! 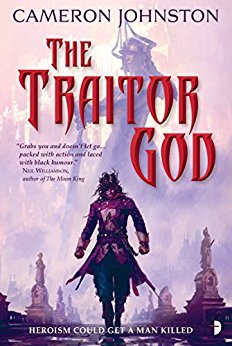 A city threatened by unimaginable horrors must trust their most hated outcast, or lose everything, in this crushing epic fantasy debut.

After ten years on the run, dodging daemons and debt, reviled magician Edrin Walker returns home to avenge the brutal murder of his friend. Lynas had uncovered a terrible secret, something that threatened to devour the entire city. He tried to warn the Arcanum, the sorcerers who rule the city. He failed. Lynas was skinned alive and Walker felt every cut. Now nothing will stop him from finding the murderer. Magi, mortals, daemons, and even the gods – Walker will burn them all if he has to. After all, it wouldn’t be the first time he’s killed a god…

Big magic, big war machines, even bigger monsters, and the poor bastard of a magic user stuck right in the middle of that hot mess. Exiled magus Edrin Walker’s friend was murdered after discovering a threat to the city, and he has returned to the very last place he wants to be in order to track down the killer. Things do not quite go to plan.

I live in Glasgow, Scotland, with my wife and a floofy purr-beast of a cat. I work in IT, but dream of living the life of ‘The Author’, which in my head is a mix of the TV show Castle and long contemplative walks through dark forests, stone circles, and windswept sea shores, followed by ponderings in an old fashioned study by a crackling log fire with a glass of whisky in hand. Hey, it could happen! And it’s something to aim for now that one of my lifelong dreams is coming true. Being a published novelist is one of my top two childhood dreams, but being an astronaut might take a little more doing.

When I am not writing I might be doing something with chain mail (my current project is a dragonscale tie), practicing swordplay, building LEGO, or playing D&D or board games.

In some respects it was a fairly standard route to publication for a first time novelist. Years spent working over it and improving my writing skills, multiple drafts thanks to other people offering critique. Then it was dipping my toes into the words of agents: a few early nibbles, a bunch of rejections and a lot of waiting. At a convention in 2016 I was telling my friends Stephen Aryan, Adrian Faulkner and Rob Adams that the agent Amanda Rutter of Red Sofa Literary had asked to see my Full manuscript. Stephen and Adrian, cheeky tykes that they are, didn’t mention that they knew her. Later on they decided to embarrass me by saying to her that she should really start reading it sooner rather than later – mostly so she could come over and tell me! Cue a little redness creeping into my cheeks as I’m put on the spot! As it turned out, on reading through the manuscript she loved it, and after a few months of polishing, it was sent out to publishers. A few months after that Angry Robot, wise and wonderful people that they are, came back to say they just had to have it.

I think most people have the same response when they encounter the Magash Mora: “HOLY SHIT, THAT IS DISGUSTING,” but then they read on to find out what happens with it. It’s part Lovecraftian horror and part gleeful Japanese anime excess born of a need for something that can threaten a city of powerful magic users.

Early on when this setting was developing it just seemed right to me that if you start drinking of the ocean of magic that it wouldn’t leave you drained – quite the reverse, you would be filled with unimaginable power. That said, magic can cause wonderful and terrifying things to happen and that has to take a toll on the human mind and body channelling it, especially if you open yourself up to more than you can handle and start to rip apart. Magic accelerates natural processes, causes mutations, and tries to make you a better and stronger host for magic itself – it wants to be used.

It was a challenge, especially getting past the horrible sinking feeling when you open up the documents and see the many comments and edit suggestions – where do you even start? But I’m not one to indulge in an author tantrum, I’m the kind of writer that reviews the detailed feedback and looks to see how it will improve the novel. In 99% of things, my agent and editors were right – if I can replace an entire chapter with three lines earlier on, well…it has to go, no matter how much fun I had writing it. A clear case for ‘kill your darlings’ if I’ve ever seen one. When going through the edits there came a point when it all started to come together in a slicker, meaner form and that was definitely a moment of enlightenment.

Oh geez, I would not stand a chance against any of them. I’d be obliterated no matter who it was. I’m tempted to go with Cillian – as all the blood is ripped from my body it would at least be quick and painless. No, wait, I’ll go with Martain – his Gift is for stopping other mages so at least I’d stand a better chance.

Sure you can! You wouldn’t miss an arm, right? Like many cats, I suspect some meaty bribery would allow a very brief stroke while they are distracted.

If The Traitor God does well then Edrin Walker might return to reveal more of humanity’s struggle against ancient and inhuman powers that would enslave them. And they will also show Edrin Walker’s struggle not to do the exact same as his own power grows. Watch this space…uh, or A space where I post things.

As for Cameron Johnston, I have a third of two separate novels done and dusted, ready for me to expand into full length manuscripts, one stand-alone and one as part of a series. I wrote them for fun while The Traitor God was out on submission to agents and publishers, and to distract myself from all the waiting and refreshing of the inbox, which, as it turns out, is not the best use of your time. Then it’s back to submissions, to publishers, and back to the waiting and hoping with fingers crossed. One way or another, sooner or later, you’ll be seeing more books from me. Preferably sooner…

One thought on “The Traitor God – interviewing Cameron Johnston”