People, it was A WEEK. An epic and hugely enjoyable week, but gods alive, it was exhausting. Instead of boring you with a detailed breakdown, I’m going to throw out the highlights because, honestly, it was a joy and a privilege both to attend all this stuff and for people to actually pay money to listen to me (among others, of course).

I’ve done SRFC before, and I’ve attended as a fan too, and it’s always a blast. Authors, readers, fans, booksellers, it’s a mix of genre lovers crammed into a relatively small space in a pub to listen to readings and Q&As.

I did the first ever (and to date the only) live reading from Bloodchild, which is published ONE WEEK TODAY AND YOU CAN PRE-ORDER IT NOW HERE. Ahem. It was a bit of a struggle trying to find the appropriate place to read from, seeing as it’s the final book in the trilogy and I didn’t want to give away too much. In the end, I had to give minor spoilers to the audience before the reading, but it seemed to go down really well and Magnus, the question master, had a lot of great questions for me afterwards. There were even a few from the audience.

Other authors reading that night included Gray Williams, Chris Humphreys and Mary Robinette Kowal, who less than a week later went on to win the Best Novel Hugo award at Worldcon – more on that later.

Mary was a joy to listen to, both reading and during her interview. An accomplished puppeteer among her many other skills, she took a silk scarf and with a few twists turned it in ‘scarf dragon’, a puppet she used to explain how she goes about the the process of writing (it has to do with movement, focus, reaction etc). Absolutely fascinating. She was gloriously humble about the impossibility of her winning the Hugo later that week, which I really wanted to tease her about after the actual Hugos, but couldn’t get near her due to the legions of adoring fans surrounding her.

After my delayed train back to Birmingham after SRFC, I had one day at home before flying to Dublin for Worldcon. This was the longest convention I’d attended – Thursday afternoon to Monday morning – though it didn’t officially finish until Monday evening. It was full on – and full of fun.

I met some great new people and met up with some old friends. Highlights were the HarperVoyager UK/US dinner on Thursday night; spending lots of time with Christian Cameron (mostly in the bar, it must be said); post-panel drinks with Julie Crisp, Joe Abercrombie, Joe Hill, Gillian Redfearn and Sam Hawke; meeting Sam herself and Devin Madsen (friends on Facebook who are both accomplished Australian authors); chatting with Peter Brett at dinner and in the bar; meeting that reprobate Ben Galley; finally meeting the awesome Tasha Suri; and catching up with the best fantasy gang of friends from far and wide, including Kareem, Dyrk, Sadir, Alicia, Graham and many, many more.

I was scheduled in for two panels, both on the Sunday, but got railroaded into a third on the Saturday night by Sam Hawke, when it transpired Devin had lost her voice and couldn’t take part. The panel was called Send in the Crones, focusing on older women in genre fiction – or their lack. I found out precisely 20 minutes before that I was taking part, so I had a little panic, but in the end it was probably the most enjoyable panel of the convention for me. Even better, considering it was 9pm on a Saturday night, the audience was packed out. Seems a lot of people want to see more older women in fiction – and I’m very, very happy to oblige them. I believe the general consensus was – don’t give birth to the Chosen One; BE the Chosen One.

My other panels were on Star Trek: Discovery v The Orville, of which I was probably the least qualified of the panellists, approaching it very much as a ST fan, rather than an authority. Numbered among my co-panellists was an engineer who pursued her career BECAUSE of Star Trek and a fluent Klingon-speaker. Still, it was very lively with lots of opinions being thrown around. Another sell-out audience, too.

My final panel was on the logistics and economics of warfare, moderated by the excellent Stewart Hotston. I think he was probably far more qualified to have been answering, rather than asking, the questions, but he did a grand job of keeping us all going and we had lots of interesting – and some challenging – audience questions at the end.

By this point, I will admit that I was flagging. I was tired, I was hungover, my tiny B&B had live music in the pub below on the Friday and Saturday nights, and frankly I wanted to go home to my husband (so grimdark, I know). But first we had the big last night of the con – or the last night for most of us.

We had an awesome time at dinner and in the bar afterwards where we played with Christian Cameron’s swords (not as dangerous as it sounds; also not a euphemism), before I managed to escape to my bed only a few hours before needing to leave it again to make my way to the airport on Monday morning.

And then to Tuesday, and Voyagercon.

I had lost much of my voice by this time, and was sleep-deprived and a little hysterical, but that was no excuse. There was a panel to do and people to talk to. So I did. It was the first Voyagercon, an afternoon and evening of panels hosted by my publishers HarperVoyager, beginning with a publishers and agents panel for those writers looking for advice and input on being traditionally published. I met up with Mike and GR, who both had slots booked for a five-minute ‘ask us anything’ with either my agent, Harry, or one of Voyager’s publishing team.

It seemed to go well for them both, and particularly as it transpired many people who’d booked time slots with the editors/agent didn’t actually turn up, so they got to have another five minutes for more questions!

After that RF Kuang and SA Chakraborty did a panel on mythology as inspiration, then editor Vicky Leech moderated myself and Anna Smith Spark on our panel, entitled Badass Women – all about female characters and the different types of strength they bring to a narrative; plus what’s it like being women writing in the epic/grimdark space. Finally, there was Escape the Dungeon! with Den Patrick and Peter Newman, a 30-minute DnD style romp through the audience in order for us all to escape in time. The monsters everyone faced were taken from the authors’ books, but there were even scarier monsters than that – editors loomed in one particularly dank corner of the dungeon and the audience had to choose whether to listen to them, ignore their advice, or lie to them. (Note: I think most authors do all three at various times, but the only best outcome is always to listen.) 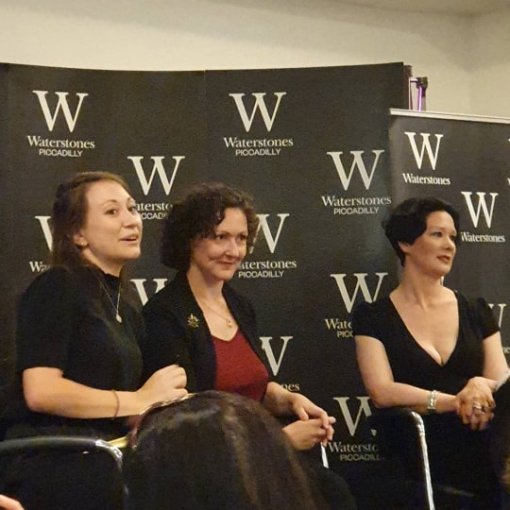 And then, after a jaunt to the pub with blogger/reviewer Justine and her husband, and a dinner of well-earned pizza, it was bedtime. And then it was Wednesday, and time to sign the 500 limited first editions of Bloodchild at Goldsboro Books (there are still some available to order if you want one). I did say it was A WEEK, didn’t I?

As ever, it’s a thrill to see and sign copies of my books, and to see 500 all piled up together waiting for my signature still takes my breath away. There’s no feeling quite like it, and I enjoyed every second despite my exhaustion and my apparent inability to remember how to write the number ‘2’. Whoever gets signed number 222, please note I spent a ridiculous amount of time just staring at the page, wondering how to write that elusive number three times in a row.

And there you have it – the busiest week in the world, for me at least. I did little but sleep and eat healthy food – conventions are not conducive to salads, or even vitamins in general – until I felt ready to get back on the horse. And so now it’s time to continue with the new book, because fortunately for us authors, they don’t write themselves. Allons-y!